The rustic charms of Batu Kurau

2011-01-15 10:20
BATU KURAU, Perak: In the past, sightseeing used to be nothing more than enjoying the local delicacies, staying in a luxurious hotel, shopping for souvenirs, enjoying the breathtaking scenery and unique architecture of the destinations.

Today, people do not just fancy taking pictures in front of the Eiffel Tower or the Great Wall of China, or sampling delicious local food. They are increasingly looking into the cultural attractions and historical legacy of their destinations, or simply rejuvenating themselves with the natural beauty of Mother Earth.
In recent years, many countries around the world are promoting their eco-tourism resources to the new generation of tourists.
Such itineraries allow visitors to relax their minds, escape the hectic urban monotony while offering them a new kind of travel experience and educating them about the importance of a balanced ecosystem of our natural environment.
Although Batu Kurau is a popular destination in Perak known for its mouth-watering durians, the town has been largely bypassed by development because of its remote location. The emergence of eco-tourism has created unprecedented opportunities for foreign tourists to come here and taste the delicious King of Fruits while learning more about the unique culture of Batu Kurau. 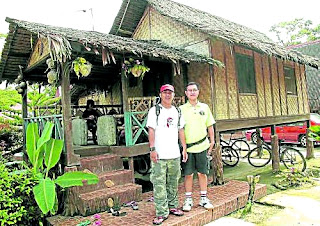 Homestay
Batu Kurau is far from the major towns in the state, and this makes it an ideal place to unwind in a ruling setting surrounded by the peaceful and harmonious natural environment.
Thanks to the tireless effort of the Taiping municipal council to encourage local villagers to involve themselves in the homestay programme, more and more domestic and foreigner tourists have been lured to Batu Kurau to experience the traditional lifestyle of rural Malays and savour the juicy fruits the town offers.
With its wealth of natural resources, Batu Kurau is poised to become a much sought after eco-tourism destination in the state.
As a matter of fact, Batu Kurau indeed boasts a couple of unique attractions that can potentially turn the town into another major destination in the country if they are appropriately promoted. 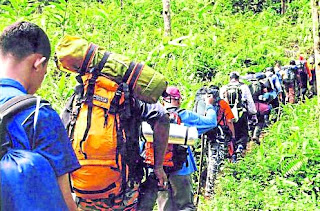 Exploring new trails
Early last year, the Taping municipal council has organised a group of 69 pioneers to explore new trails through the forests from Batu Kurau to Bukit Larut in a bid to establish a new attraction for the more adventurous and nature-loving visitors. The natural beauty of virgin forest from Batu Kurau to Bukit Larut is well preserved with its amazing profile of flora and fauna kept largely untouched.
The MPT tourism bureau chief Halim said the municipal council prioritised the tourism development of Batu Kurau this year in a bid to elevate the local economy. 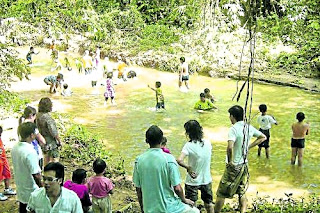 Beauty of Nature
The increasing popularity of homestay programmes in the country offers tourists with yet another choice of affordable accommodation.
Locally born and raised Shabri owns a guest house in Batu Kurau, Chalet Teratak Afrina, which has successfully attracted many tourists charmed by the traditional Malay rural lifestyle here since it started providing accommodation for visitors.
He decided to give a shot on the guesthouse business in his village after discovering the potentials of offering his traditional stilt house for accommodation and planning travel packages for tourists.
Disused tin mine
With the information provided by the elderly residents of Batu Kurau, the Taiping municipal council also discovered a disused tin mine while pioneering a new trail through the forests from Batu Kurau to Bukit Larut.
This old tin mine can potentially be developed into another major attraction where tourists can learn about the mining history of the town and how local villagers managed to brave the tall mountains to look for tin deposits.
One of the pioneers in the MPT expedition team Wu Jiajie told Guang Ming Daily they found six tunnels left behind by the early excavators. It is not hard to imagine how dangerous and risky it was for the early miners to traverse the undulating and hostile terrain in search of tin.
Some of these tunnels are very deep but extremely narrow. (Translated by KATHY TAN KAY KHEE/Guang Ming Daily)