fireflies
Kampung Dew in Perak is gaining a reputation as a firefly tourist destination. PUTRI ZANINA is fascinated

AS the boat glides along the river with water that barely shimmers in the pitch dark of the night, our boatman and guide’s high-pitched voice pierces the air.

There is no moon and Abdul Halim Bidin tells us in that now familiar high tone, it’s a “perfect time to see fireflies”.

Since we left the jetty at Kampung Dew about 15 minutes ago, Halim has been chattering almost non-stop, excitedly telling us how something so ordinary to villagers like him has become a tourist attraction.
For years, there have been huge colonies of fireflies thriving near the small, sleepy village, which is about five minutes’ drive from the Kamunting toll plaza near Taiping in Perak.

“Once a little boy on one of our fireflies cruises asked me, ’Pak cik, are you cheating (me)? Did you put battery lamps on those trees?’. I told him, ‘no lah, these are not lampu kelip-kelip, these are for real’,” says Halim, laughing as he recalls the story.

Lampu kelip-kelip are blinking fairy lights that the Malay community often put up in their homes as part of Hari Raya celebrations. These bulbs flicker, just like the kelip-kelip (fireflies or lightning bugs, as some call them). I feel the bugs flash their lights more spectacularly than light bulbs. And along the Sungai Sepetang in Kampung Dew, the natural lightshow is spectacular.


I sit in the boat, entranced. Millions of fireflies flicker in perfect synchrony on huge berembang trees on both sides of the riverbank. The berembang trees are a mangrove species that’s the only known habitat for fireflies in this country.

The flickering lights in the trees cast brilliant reflections on the surface of the river. It’s like a magic show in the dark.

Halim breaks the spell when he says the fireflies here are mainly of the Pteroptyx tener species, one of 2,000 firefly species that thrive in tropical and temperate regions. It is also the same synchronous species that inhabit the more famous Kampung Kuantan in Kuala Selangor, known the world over for fireflies watching.

But I say, move over Kampung Kuantan, your lights are out. Here comes Kampung Dew — where it’s still so raw, so wild, so bright.

Many of the berembang trees here are matured, standing as tall as 1½ storey buildings. The fireflies colonise these trees, perching on the leaves and branches, and even just hovering.

The flashing starts just after sunset and goes on till pre-dawn. This is how the bugs communicate. It’s a natural phenomenon, an astonishing collective mating trick. The males fly and flash, then pause.

Are they re-charging or waiting for an answering flash? I wonder. The males flash about every seven seconds and the females answer about two seconds later.

The romantic rendezvous for adult bugs are short-lived. It’s a bit tragic, considering the showy light antics. The adult firefly lives for just two weeks, mainly to find their mates. After mating, the male firefly will die and the female dies after laying its eggs.

Before the boat trip, I had joined the villagers (mostly farmers, fishermen and factory workers) in their first ever Pesta Kelip-Kelip. It was a celebration for the simple folk who have been introduced to a new means to support their livelihood, an eco-tourism product, said the VIP who graced the event, Datuk See Tean Seng, the State Legislative Assembly coordinator for Kuala Sepetang.

Representing Perak tourism committee chairman Datuk Hamidah Osman, See came not only to launch the Fireflies, Mangroves & Community celebration but also to launch the logo of Pertubuhan Kelip-kelip Cahaya Alam Perak (Kecap), a body newly formed by the villagers of Kampung Dew to manage its firefly location as a tourist destination.

Set to be an annual event, it was organised by Kecap and the Malaysian Nature Society (MNS), and supported by the Perak state government, the Natural Resources and Environment Ministry as well as Ramsar Regional Centre East Asia.


MNS was instrumental in the participation of Ramsar, which is the convention on wetlands signed in Ramsar, Iran, in 1971, to provide national and international framework for the conservation and wise use of wetlands and their resources.

The villagers learned about nature conservation through workshops held by MNS and KECAP.


Children taking part in firefly colouring contest, a side event held during the fiesta

Many people can take credit for the firefly project, including Mohamad Noor Salleh, Kecap president and village head of Kampung Ayer Puteh. 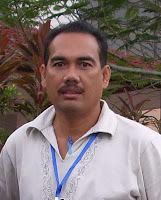 The villagers are also assisted by concerned individuals such as Khairul Salleh Ahmad, a clerk from Taiping and Kecap secretary. The locals fondly call him Cik Khairul. According to Halim, it was Khairul who helped start it all.
.
“We were fishing on the river one night and Cik Khairu as so in awe of the fireflies here that he said we could promote this place to tourists, like in Kampung Kuantan.”

About two years ago, the villagers, with the help of Khairul, started bringing small groups of visitors to see the fireflies.

“Last year, more than 250 people came,” says Khairul, who actively promotes the Kampung Dew firefly tour through his own blog, fireflyzone.blogspot.com. This has created new waves along Sungai Sepetang.

“This place has the potential to become the tourism icon for Perak,” says MNS president Professor Dr Maketab Mohamad, whose members put up informative booths at the event location next to the river jetty.

“There are 130 berembang trees with huge colonies of fireflies here in Kampung Dew. There are only about 30 now in Kampung Kuantan,” adds Maketab.

There used to be more in Kampung Kuantan but development near Sungai Selangor had disturbed the fireflies’ habitat and resulted in the bugs slowly disappearing.

While MNS is helping with nature conservation, Kampung Dew villagers, who are new to running an eco-tourism venture, need other types of help. They need money to improve infrastructure, especially the jetty.

“The existing wooden platform is fragile — it needs regular scrubbing or it gets slippery,” says Halim, who’s also in charge of safety under Kecap.

There are no ticket counters at the jetty. Visitors call ahead to book, and Khairul and his team will arrange the tour.

See is aware of the locals’ needs and plans are afoot to get the allocation to improve facilities. The plan also includes the building of a firefly monument in the area to signify its attraction.

“Visitors can take pictures against the backdrop of this monument since it’s difficult to photograph the fireflies in its habitat,” says See.

Indeed, it’s not easy to take pictures of the flickering fireflies. Our pictures turned out blotchy black.

As Halim steers the boat further downstream where the river is wider, we see more fireflies in the tall berembang trees. These grow in short stretches, interspersed with long rows of nipah palms.

“The 130 berembang trees which we counted with MNS along this river are the ones that have very large colonies of fireflies. We don’t count the trees with smaller colonies,” says Halim.

He says nipah palms are a major source of income for the villagers, besides fish and prawn from the river. Villagers harvest the leaves to make attap roofing, baskets, mats and even cigarettes. The juice from the flowers is made into drinks and vinegar, and the fruit is eaten.

While nipah is favoured over the berembang for economic reasons, the villagers are beginning to realise the need to conserve the berembang to support the firefly project.

Halim welcomes the local authorities’ recent move to protect the firefly area. He says development is not allowed within 100m from the riverbanks.

For the love of fireflies

With berembang, nipah and wild bushes silhouetted against an almost black sky, the area looks invitingly pristine. It remains so almost throughout the long and slow journey.

I had opted to go in a small boat that could only fit four persons, a wise decision as it turned out and one that allowed me to take in the scene more intimately.

Halim is careful to keep the outboard motor noise down to a purr, unlike the bigger boats with some 10 people on board, zooming past noisily.

Noise, pollution and light from camera and torches aimed directly at the fireflies are recipes for disaster that will eventually drive away the sensitive tiny creatures that are just the size of a rice grain.

I appreciate it when Halim lets the boat glide near the bank, never once ramming the branches to disturb the bugs (guides in other firefly spots are fond of doing this).

Halim says none of the guides smoke when conducting the tours. It’s part of the ethics they observe in fireflies territory.

“We should not disturb them. We only pick up those that have fallen in the river, and then release them,” says Halim, a fisherman in the day and guide at night. Born and bred in Kampung Dew, the river is his playground. It is the main source of life for this village, which is divided by four mukim (sub-district) — Asam Kumbang, Jebong, Gunung Semanggol and Selinsing. The fireflies are in Asam Kumbang which has a population of about 200 people.

Kampung Dew is named after Arthur T. Dew, a British citizen and owner of Perak Estate in the early 20th Century. It is located at the start of the 10km-long fireflies colony. It takes about three hours to cruise the full distance and return.

“I’ve been plying this river since I was 6. There used to be much more fireflies in the past,” he says.

Today, Halim worries about many issues, such as the wooden platform at the jetty, rubbish and farm waste thrown into the river by villagers and industry waste dumped by nearby factories.

The villagers depend on the river for survival. Though action has been taken to deal with some of the factories, the dumping of other types of wastes and rubbish persists, which if not stopped, will affect the fish, prawn, crab and snail.

“Firefly larvae feed on the snails, so imagine if these are gone,” laments Halim, one of the few villagers who are serious about the firefly venture. They are the custodians of this rural community project. Development has to be controlled lest it kills the goose that lays the golden eggs.

Kampung Dew is still as fresh as a dewdrop. It’s best for its people to learn from the Kampung Kuantan experience.

How to get there

From the North-South Highway, exit at Kamunting in Taiping. Then follow the old trunk road towards Parit Buntar. Nearing an elevated road that looks like a bridge, you’ll see a Kampung Dew Kelip-Kelip signboard. Turn right and, in a few minutes, you’ll reach the jetty.