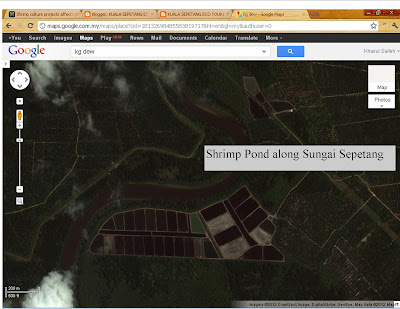 Outcome from Sungai Sepetang Stake holder Meeting held on 22 March 2011 at District Office is to reject all new aquaculture application with remark "Fireflies Zone". To gazetted the fireflies zone as nature park. Next meeting will include Kerian District Office.
The problem arising from the shrimp farming project near the river here is not only destroying the mangrove forests and polluting the river but also threatens the livelihood of 100 fishermen, bird life and breeding sites of several species of firefly.  The fireflies’ population here has dwindled due to disturbance from rays of light emanating from the lamps installed in the aquaculture farms.

According to fishermen met by CAP, the problem has been ongoing for the past 15 years. Several complaints have been made to the authorities but no action was taken.

A fisherman, Yusof Ishak, 60 said that fish and prawn catch has declined and some fish species have become extinct because wastes from the shrimp ponds were discharged into the river. Among the endangered species in this river are catfish, grouper, snapper and dolphin.

He claimed that previously when the river was not polluted, fishermen could earn more than RM70.00 per day, but now they only manage to get RM20.00 a day.

He stated that the fishermen here are worried about their fate and future as shrimp farming projects are mushrooming along Sungai Sepetang and the mangrove forests here are being destroyed. This would bring about serious environmental and socio-economic problems here.

The fishermen in Sungai Sepetang will be setting up an action committee to fight their cause and protect the environment in this area.

CAP urges a thorough investigation by the government. "We want to know whether a study on the environmental and socio-economic impacts was done before the project was approved and the status of the land and mangrove forests (about 100 hectares) involved. The findings should be revealed to the public."