By Bella – Move aside Thailand, as Matang is taking over as the regions’ best place to catch a glimpse or two of the highly intelligent and lovable pink dolphins. Yes, you have read it right as Taiping’s Matang area is home to a small pod of these cetaceans which are globally listed as threatened. Appropriately known as Indo-Pacific Humpback dolphins, the mammals along with a remote fishing community, share the waters and fish of a vast estuary at the edge of the Matang Mangrove Reserve.
While the pink dolphins of Nakhon in Southern Thailand attract boatloads of tourists and are harder to spot, their cousins in Matang are quite unheard of despite being less elusive. Peraknews leant about the pink dolphins from Taiping Municipality Council Tourism Publicity Officer, Hanim Ramly, who herself only found out about their presence during a field trip to that area this year. “I was accompanying a local government tour group on a boat trip to Kelumpang Island when all of a sudden, there was this pod of dolphins swimming along with us,” said Hanim who admitted that through her 20 years of promoting Taiping’s tourism, she had never heard of the dolphins’ presence in Matang. Neither have most people except those who eke a living from the waters of Matangs’ mangroves near Kuala Sangga Chinese fishing village.

According to locals from the village, the dolphins are usually spotted in the afternoon and are more active during high tide. Their century old village itself is remote. Its dwindling population of less than 100 relies on boats for transportation, generators for electricity, and rain water for washing and cleaning while drinking water is brought by boats. Probably the remote location of Kuala Sangga which is about 10 km from the jetty of Matang’s Forestry Department, explains the secrecy surrounding the dolphins. Interestingly, there is a floating chalet in the middle of the estuary which can accommodate groups of up to 20 visitors, and it lies smack in the midst of the dolphins’ favourite romping site. That makes it much more convenient for dolphin lovers to catch up, close and personal glimpses of the mammals. “Dolphin-watching trips organised by tour operators in southern Thailand doesn’t last more than 2 hours in a boat under blazing hot conditions,” said a Malaysian journalist who went for a similar trip organised by Tourism Authority of Thailand last year at Songkla District in southern Thailand.
There are about three to five of these dolphins according to lucky witnesses, and sometimes the friendly and intelligent creatures swim alongside boats and occasionally display their acrobatic swimming skills. During a recent visit to Matang, the Peraknews team was lucky to have one of this lovely mammals swimming alongside their boat for more than 30 minutes. It did not show any fear, neither did the dolphin seemed very interested. But somehow, it looked like it was playing a game as the mammal always did an appearance 50 m from our boat. Boatman, Samad who is a ranger with the Matang Forestry Department told us the dolphins are more active and playful during high tide. The one next to us was probably not too interested due to the lower tide and less fish during that period.
Although it was a short and interesting encounter, watching dolphins in their environment is truly an exhilarating experience that all of us can experience now at the worlds’ best sustainably managed mangrove reserve just next to Taiping. Those interested to spend a night in the estuary, watch fireflies and view the dolphins can contact the Kuala Sepetang Tour Guide Amirul 012 5145023


AT least 27 species of marine mammals, including dolphins, whales, porpoises and dugongs have been spotted in Malaysian waters over the years.
Marine biologist Dr Louisa Ponnampalam said the mammals were present all-year round, but because of a lack of awareness, not many people know this.

Sightings, she said, had been made in the waters surrounding Peninsular Malaysia such as the Straits of Malacca, Straits of Johor and South China Sea, as well as off Sabah and Sarawak in the Sulu and Sulawesi seas.

In fact, although the recent dolphin sightings in Kuala Sepetang have created a buzz, fishermen there say the marine mammals have been around for at least 30 years.
Speaking to the New Straits Times, Louisa said the Matang Mangrove Forest Reserve, where the dolphins were usually spotted, was well kept, and therefore, provided a suitable habitat for such creatures.

"Since dolphins will follow wherever their prey go, such as fish and squid, there must be an abundance of food there," said the post-doctoral research fellow at the Institute of Ocean and Earth Sciences at Universiti Malaya.

Despite the heavy rain that day, they managed to catch a glimpse of the dolphins and confirmed that they were Indo-Pacific humpbacks.

The two recorded preliminary data such as water depth, water salinity, number of dolphins sighted, the dolphins' behaviour and human activity in the area.

Up to five dolphins were seen, most of which appeared to be young adults. One calf was spotted among the pod.

Louisa said more studies should be done on the dolphins in Matang as they lived in a pristine environment and much could be learned from observing them.

When asked about the dolphins' potential for promoting ecotourism in Malaysia, Louisa said it was important for sufficient research to be done first, as little was known about them.

"If we wish to promote dolphin-watching as a tourist attraction, we need to make sure that we know enough about the animal, because such activities could be detrimental to them, especially if ecotourism initiatives are not properly managed or regulated, as it could lead to the dolphins migrating elsewhere."

She also said it would be best to use small boats that were easier to manoeuvre, as well as those with quieter engines so as not to aggravate the dolphins and other marine animals.

Louisa added that people should be careful when dealing with these creatures.

"There is the common perception that dolphins are really friendly animals, but in reality, they are among the top predators in the marine food chain.

"Dolphins can be curious and playful creatures, but people need to remember that these are wild animals and should be handled with caution."

Louisa is also part of Langkawi Dolphin Research, an initiative that works with the Fisheries Department and Marine Parks Department to study dolphins and collect more information about them for conservation efforts.

She said it was important to keep tabs on marine animals because they could be used as health indicators of our oceans.

"The absence of marine animals such as dolphins, whales and turtles in an area should ring alarm bells, as it is an indicator that the area can no longer sustain them, which means that humans are in trouble as well."

Louisa said she hoped in the future, conservation efforts in Malaysia would focus not only on the protection of wildlife, but also their natural habitats as well, as the animals' survival would be reliant on the condition of their environment.

There are generally three threats to dolphins' survival -- the degradation or loss of their natural habitat, depletion of food and entanglement in fishing gear -- all of which occur as a result of human activity. 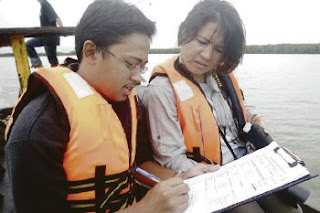 
Read more: A sign our seas are full of life http://e.nst.com.my/nst/articles/12sep/Article#ixzz1lqckhiC3