The fourth edition held at Perasa Autocamp Bukit Gantang, saw the participation of 100 students from 47 schools, accompanied by 16 teachers and eight TM volunteers. Like the previous camps, there were lots of exciting and unforgettable activities organised throughout this camp.

Out for a walk: Participants jungle trekking in the Taiping area.

The participants were taken for jungle trekking and guided in a nature study session where they learned about energy and its applications, which is the main theme of this edition’s camp.

They also had the opportunity to experiment with energy creation using a special mini solar kit.

The participants and facilitators then went to Kampung Dew in Semanggol where charcoal stoves are produced alongside other cottage industry initiatives being carried out in the village.

Here, the participants witnessed how coal is made from mangrove tree trunks in different stages.

They also had a hands-on experience when they tried lifting the trunks and stripping off the bark before tossing the logs into the furnace. 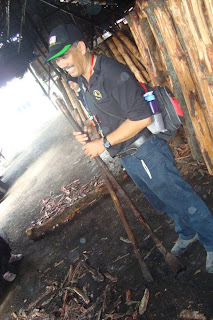 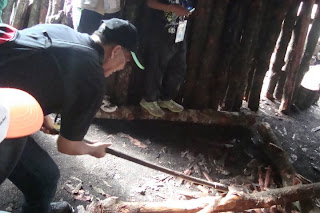 ther than that, the participants were given the chance to immerse in a typical Malay kampung environment and culture with exciting activities lined up, such as catfish fishing, do-it-yourself ice kacang and weaving palm front roofs that are used at the charcoal plants.

The warm hospitality of the community shined through when they welcomed all of the participants to their homes during break time, or in Bahasa called rumah bertandang, providing facilities for the participants to freshen up for more activities in the evening.

The participants were also taken for a boat ride along Sungai Limau to witness the wonders of fireflies, with lights emitting from their tiny bodies, making the mangrove trees look like Christmas trees.

In all, about 250 community members and villagers were involved in the programmes at Kampung Dew.

The last day of the camp saw the participants presenting their ideas on conserving the environment through role-play activities and games.

The next camp will be in Permai Rainforest Resort, Kuching from July 22 to 24.

Organised according to zones — North, South, Central, East, Sabah and Sarawak, participants are taken on adventures in jungles, where they get invaluable first-hand experience, generating excitement and appreciation for the environment while understanding various environmental issues and concerns.

TM Earth Camp and the establishment of Kelab Pencinta Alam TM are the flagship programmes under the Environment platform, one of the three major platforms of corporate responsibility (CR) that the company promotes, besides Education and Community and Nation-building.

For more information on TM and its other CR initiatives, visit www.tm.com.my