Sungai Sepetang-one of the major firefly river in Perak 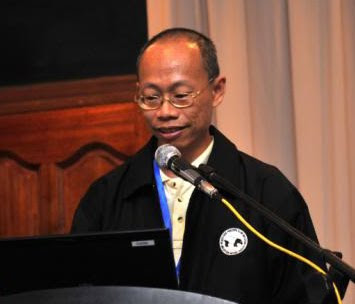 Posted by: malaysianfireflies on: March 23, 2010
In: firefly symposium or meetings and media
Comment!
http://thestar.com.my/services/printerfriendly.asp?file=/2010/3/20/north/5892618.asp&sec=north
The Star Online > NorthSaturday March 20, 2010
Call to look after fireflies By FOONG THIM LENG
The firefly colonies can be found about 1km downstream from Kampong Dew, Taiping, Perak, Malaysia.
Wong said the river could be easily polluted by waste water from the farms and plantations.
”The firefly species found in the man-grove of Sungai Sepetang is the ‘pteroptyx tener’, the same species found in Sungai Selangor.
”The adult fireflies flashing together every night on a ‘berembang’ tree when they mate is a mesmerising sight to watch,” he said in an interview.
Mesmerising attraction: Wong giving a talk on fireflies at Sungai Sepetang during the MNS 70th anniversary roadshow in Ipoh. Sungai Sepetang, Wong said, was one of the congregating firefly zones (CFZs) in Malaysia, adding that some form of regulation was needed to protect the river’s firefly colonies.
”MNS is currently documenting the major CFZs in Malaysia for the Government to know where to protect and promote the fireflies as well as the mangrove habitats which are fast disappearing in the country.
”The mangroves in a CFZ act as a nursery for young fish and marine life, protect the coast from tsunamis and erosion, create food sources and provide charcoal,” he said,
Wong said the fireflies were an important eco-tourism product which could bring in revenue to the local community, state, and country just like the Sungai Selangor firefly watching industry.
“The fireflies of Sungai Sepetang are not the only attraction around here.
“Tourists can also visit the historical sites around Taiping, museums, charcoal factories, mangroves, fishing villages and also enjoy the local food.
”The fauna found here include migratory birds and crocodiles which tourists would love to watch,” he said.
Wong said the existence of fireflies was a good indicator of a clean river.
”In Japan, fireflies are protected by law. Their firefly watching period is only three months in summer.
”The drains or former streams are rehabilitated to become firefly habitats and are protected and looked after by the community.
”The Japanese like to watch fireflies and they come all the way to Malaysia to do this but locals here do not know the existence of fireflies in their own backyard and lack awareness in firefly protection,” he said.
Dicatat oleh Khairul di 9:28 AM